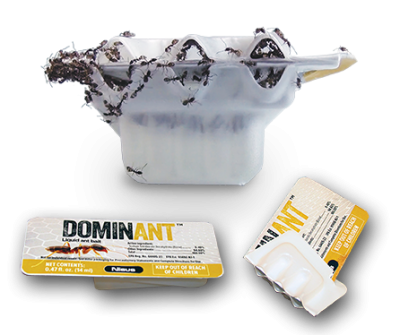 One of the biggest questions each year is: “When will pests be active in my area?”  Unfortunately, that is a difficult question to answer and depends heavily on region.  However, once you experience a few warm days in a row, you can guarantee the pests are becoming more active.  As bright green new leaves emerge and flower buds pop open, pests are ramping up their foraging efforts and working diligently to do what is needed to leave behind many generations to follow.  Spring is one of the most efficient times to bait so that you can gain control before problems begin.

Many insect activities are suspended in what is called “diapause” during the difficult temperatures of winter months.  As it gets warmer, insects shrug off their overwintering states and become more active.  Ants start to grow their colony sizes, with resulting increased feeding and foraging.  This is an ideal time to conduct a preliminary insect bait treatment around the perimeter of the structure.  In most cases, granular bait is the best fit, depending on geographic location and pest insect species in question.  What’s ideal about granular baits is they have the potential to attract multiple insect species groups, including crickets, roaches, silverfish, some other occasional invaders and, of course, ants.  The characteristics of the bait, such as particle size and attractants, help promote effectiveness against a particular pest insect species.  For example, there are some larger particle baits with a greater tendency to attract carpenter ants compared to other particle baits.  However, smaller ant species, such as the little black ant Monomorium minimum, might find the larger particle size less attractive.  Some insects, such as silverfish and firebrats, tend to forage in a non-specific manner and are less prejudiced about particle size.  These groups are general feeders and forage for a large swath of food items.

Active ingredient of the bait can have an effect as well.  Active ingredients such as Indoxicarb, Fipronil and Imidacloprid work faster than compounds such as borates.  However, they can produce a population rebound effect and are far more expensive when used to control the same size pest insect population.  Borates are a pure toxin of nature and have an asymptote, that means once crossed, death is imminent.  Borates do not show resistance and can be used in conjunction with other active ingredients without the possibility of cross resistance – something that can occur when using multiple products with the same active ingredients.  As a result, it is advised to rotate products when baiting.  For example, using Advion for the first application and then using Niban® for subsequent applications – or vice versa – for a bait maintenance program.

Liquid baits can also be used in a baiting program.  For some insect pest species, liquid baits are ideal.  Argentine ants, for example, are more prone to consume liquid ant baits compared to particle baits, particularly in drier climates.  Using liquid baits in large volumes when ants start to emerge can help lower initial colony size, resulting in reduction of colony numbers.  Moving the liquid bait stations according to changes in foraging patterns and colony movement as well is advised to maximize results.  However, liquid baits and/or a particle bait in containers need to be monitored, refilled and/or changed as necessary.

Attention to detail is what helps maximize results.  Spreading particle baits and placing liquid stations strategically will help efficacy and reduce callbacks.  Some insect species forage randomly, but ants do not.  Their attention and energy are focused and driven. Not applying enough granules and misplacing liquid stations might not produce the desired effect.  Some companies, such as Nisus Corporation, offer training videos that show the application process.  When choosing to use a bait from any manufacturer, search their website for valuable training videos.  Click here to watch the Nisus videos.

Baiting has some benefits that you can market to the homeowner.  Communicating and educating the customer about aspects of a bait, such as advantages of the particular formulation and application process and the bait’s ability to target particular pest insect species while not harming non-target insects is an excellent communication tool to use.  Focus on environmental stewardship if a “green solution” is being offered.

Using baits in a green service is mandatory.  Using compounds of nature (mainly borate baits such as Niban) as the primary bait is important.  In some cases, very heavy pest infestations may require you to use additional methods and supplemental products that contain synthetic compounds to help knock down large populations immediately. Utilize the baits to maintain control afterward.

Interior treatments would be no different.  Educating the homeowner about the importance of spring baiting and its ability to prevent interior intrusion will help gain the account.  When intrusion does occur, borate baits such as Magnetic Roach Bait® paste, Niban ® granular bait, and DominAnt® liquid ant bait can cover the gamut of all insect pest pressures.  Placing particle baits in specialized containers is also important for strategical application.  For example, if ants are intruding from an electrical outlet, one station with enough material can potentially eliminate the foraging, supplementing with faster acting synthetic baits when needed.

Also take note that introducing a bait rotation program, regardless of any addition treatments, is always advantageous.  Offering something different that’s innovative is always a plus.  Presenting such services at the start of the pest season will help acquire accounts and increase customer retention.  Most customers prefer services that are conducted outside the structure and prefer interior treatments only when necessary.  Spring-time baiting will help in this regard.  Again, communicate with the customer and show them a list of the bait product line along with the assortment of containerized baits, liquid, pastes and gels that will potentially be used.  The more education the better.  Happy baiting!