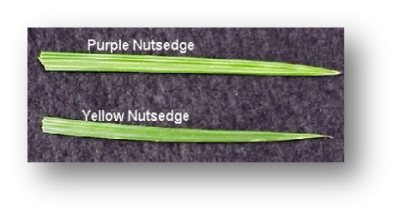 Brought to you by FMC

The two most common perennial nutsedge species that infest turfgrass are yellow (Cyperus esculentus) and purple (Cyperus rotundus) nutsedge. Nutsedge reproduce primarily by tubers, sometimes referred to as nutlets.  Nutsedge can be spread from one location to another by planting infested sod or spreading soil containing viable tubers.  Many may confuse nutsedge with grasses mostly due to the thin leaf blade and pale-green color that both nutsedge and grass weeds have compared to a dark, green turfgrass.  Emergence will vary depending on geographic location and soil type.  Generally, these weeds can emerge as early as April and thrive throughout the summer months into the fall.

The genus Kyllinga is a member of the Cyperaceae plant family.  There are approximately 40 to 45 Kyllinga sp. distributed throughout the world.  The most common perennial kyllingas are green and false-green kyllinga.  Compared to turfgrass species, Kyllinga sp. often look pale green and grow in tufts, or bunches.  Kyllinga species are becoming a more wide-spread problem weed in highly managed turfgrass.  They are able to thrive and reproduce at mowing heights ranging from 0.5 in to 3 in.

Nutsedge and kyllinga species thrives in moist, poorly-drained soils.  However, established plants can proliferate in soils with adequate to low moisture.  It is not uncommon to find these weeds growing on high spots in landscaped areas, or in well drained soils.  Nutsedge species can produce an abundant number of tubers in a season with most located in the top 6 inches of the soil profile.  Tubers can remain viable for multiple years and emerge from depths of up to 10 inches.  Yellow nutsedge tubers are more cold tolerant than purple nutsedge.  This is one of the main factors why yellow nutsedge is more widely distributed across the United States than purple nutsedge.  Purple nutsedge is predominately found in warm-season turfgrass climates throughout the southern U.S.

Kyllinga can produce viable seed as well as reproduce by rhizomes.  These rhizomes (underground stems) aid in producing dense, mat-forming populations that can quickly out-compete desirable turfgrass.  Rhizomes can be spread through contaminated soil and/or sod as well as on contaminated cultivation equipment; thereby establishing new populations in areas not previously infested.  Kyllinga can produce viable seed, which contributes to the aggressiveness of this weed.

Similarly, Kyllinga has a triangular-shaped stem as well.  These weeds are described as mat-forming perennials often times producing red to purple-colored rhizomes.  Perennial kyllingas produce a similar circular to oblong seedhead with three short leaves, or bracts, just below the seedhead.  One way to distinguish between green and false-green kyllinga is flowering periods.  Green kyllinga will continuously flower through the warm season months.  False-green kyllinga seedhead production is influenced by day-length.  As day length gets shorter in the fall, false-green kyllinga begins to flower.  In many cases, Kyllinga sp. is misdiagnosed as a nutsedge.  Probably the easiest way to distinguish Kyllinga sp. from yellow or purple nutsedge is to allow the plant to produce a seedhead.  Yellow and purple nutsedge will produce a cluster of spikes as a seedhead.  Another diagnosis key is to look for the rhizomes.  If there are red to maroon-colored rhizomes, then it is likely a perennial kyllinga.  Kyllinga sp. produce a more dense growth habit compared to nutsedge.

There are three essential factors in applying either Dismiss NXT or Dismiss South for nutsedge and/or kyllinga control.