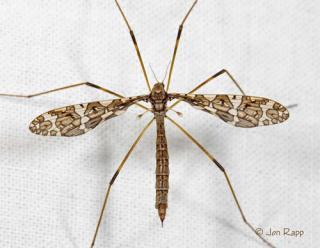 Q: Why are we seeing large populations of mosquito hawks this time of year?

Crane flies or also known commonly as Mosquito Hawks have been reported in large numbers all over the west coast. Adult crane flies emerge from the soil beneath turf grass and other grassy areas usually late summer and fall. Crane fly females mate and lay eggs in grass within 24 hours of emerging. The eggs will hatch into small brown larvae that have very tough skin and are commonly referred to as "leatherjackets". It’s this life stage that typically causes the most damage to turf. Around mid-May they enter a non-feeding pupal stage and remain just below the soil surface. In late summer, the crane fly pupae wriggle to the surface and the adults emerge. However, in places like California where there has been a long extended drought condition, Mother Nature takes over and the biology doesn’t follow the rules. Crane fly adults seem to have emerged in large numbers all across the west. Because the manageable life stage is the active feeding crane fly larvae in the lawn, treatments to the lawn areas should be the focus. Actives such as CHLORANTRANILIPROLE and CLOTHIANIDIN may assist in such crane fly larvae lawn treatments. Make sure you have read the label and that you have the proper licensing for these lawn treatments. As far as the adult crane flies are concerned, we consider them a nuisance or occasional invader pest. Exclusion will keep them out of structures.

Despite their common name they do not actually eat mosquitoes. Sometimes they eat the mosquito larvae but not enough to actually consider them mosquito hawks or mosquito eaters. So they wouldn't be considered a way to get rid of mosquitoes naturally.

How long do mosquito hawks live?

Crane flies have a relatively short life span, with most species living only 10 to 15 days before perishing.

Photo Credit: Jon Rapp on 5/11/15 in Columbia, MO, Epiphragma fasciapenne, a female with Wingspan of 23mm
Not for further use or sale without permission of photographer