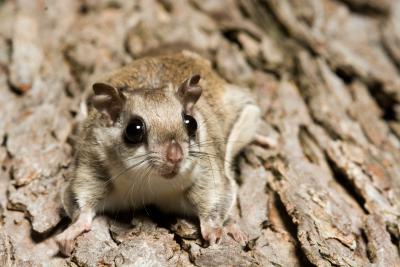 Q: What is the difference between a grey squirrel and a flying squirrel? I have a customer saying they hear squirrels at night.

There are several species of squirrels throughout North America.  When it comes to squirrel "pests" we typically think of the grey squirrel and the flying squirrel.  Grey squirrels average about 15-20 inches in length and weigh just over a pound.  Flying squirrels are typically much smaller at about 8-12 inches in length and weigh about 2 ounces.  Grey squirrels are light to dark grey with a greyish underbelly while flying squirrels can be grey, brown, or reddish-brown with a white or very light grey underbelly.  Another thing to note on their appearance is that the grey squirrel tends to have a "bushy" tail.  The flying squirrel has large dark eyes and a noticeable patagium that stretches the length of their body.  The patagium is a parachute-like structure that allows them to "glide" from tree to tree.  Both of these squirrel species consume nuts, fruit, and other plant material.  However, the flying squirrel feeds on lichens and fungi fairly often.  As a pest management professional, one of the most important things to note is that flying squirrels are nocturnal.  They do most of their damage at night or in early morning hours while the grey squirrel is more active during the day.  Both can cause damage to wires, siding, and other parts of a structure.  A proper inspection as well as interviewing the property owner may help to determine which species you are dealing with.