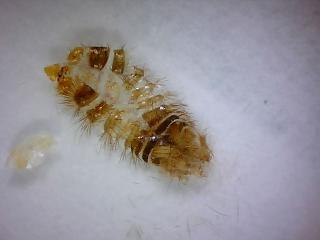 Carpet beetles are among the most difficult indoor pests to manage because of their ability to fly and also find food in the oddest places. Carpet beetles frequently fly into homes as an occasional invader from flowers in the landscape as pollen is in their diet. A few adult beetles in the house shouldn’t be cause for alarm. A management program needs to be implemented only if you find larvae developing in fabrics in your home. However keep in mind that there can be a health risk with the larval stage, even as an occasional invader.

When exposed to carpet beetle larvae hairs and blood, a carpet beetle rash (or dermatitis) was found in biopsies and clinical tests. According to the Penn State Extension, “Various reports describe, what appears to be an acquired allergic reaction to carpet beetle larval hairs and hemolymph (insect blood). These hypersensitivity reactions are characterized by complaints of being bitten by something causing an intense itching and rash. Additionally, in some patients, irritation of the respiratory tract and eyes may develop.” Clinical tests confirmed that hairs from carpet beetle larvae, of the genera Anthrenus, Attagenus, Dermestes or Trogoderma, were the source of the reactions.

If a sufficient number of carpet beetle larvae are found to be in a home area, control of an infestation will hinge on observing the signs of an infestation, and eventually locating the source. Signs of carpet beetle infestation can include finding carpet beetles near basement areas, woolen socks in boots, hats on shelve, carcasses of animals, dead beetles in walls or attic, carpet beetles indried dog food, or other similar areas/materials. Once the source of the infestation is found, the immediate item and surrounding area can be cleaned (or alternately destroyed). If no singular source of infestation can be found, utilize insecticides, including desiccant dust insecticides and synthetic pyrethroid insecticides. Some examples of dessicant dust insecticides include Diatomaceous earth and silica aerogel, which work to remove moisture from the target insect. These can be applied in wall voids and crack and crevice areas. Some examples of synthetic pyrethroid insecticides include deltamethrin, cyfluthrin, lambda-cyhalothrin, cypermethrin, sumithrin, or tralomethrin, and can be applied in cracks, as a spray.

With these points in mind, listen to your customers cues and remember a successful management strategy for carpet beetles begins with a combination of good inspection, sanitation and exclusion.