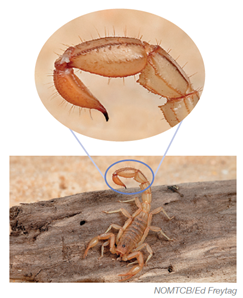 Scorpions are major pests in the American Southwest and elicit responses from homeowners ranging from indifference to terror. Like other arachnids (spiders, ticks and mites), their bodies are divided into two segments - the cephalothorax (head and thorax fused together) and abdomen. Scorpions are long and slender, ranging in size from a half inch to 5 inches in length (U.S.). The tail has five segments with a bulbous stinger located at the end that can be arched over the top of the scorpion and used in prey capture and defense. Aiding in their scary appearance, scorpions have four pairs of legs and two pedipalps (large arms with pincers). Comb-like sensory structures (pectines) are located between the last pair of legs and are used to detect prey and analyze surfaces. While they can hear well, scorpions do not see well, although they have one pair of eyes on top and two to five pairs of eyes along the front edge of the cephalothorax. Worldwide, there are approximately 1,500 scorpion species. About 90 species have been identified in the U.S., with the two most common being the striped bark scorpion Centruroides vittatus (Say, 1821) (Southwestern U.S.) and the stripe-tail scorpion Vaejovis spinigerus (Wood, 1863) (AZ/NM/CA). While scorpions can be found in many habitats, they are most abundant in desert areas. 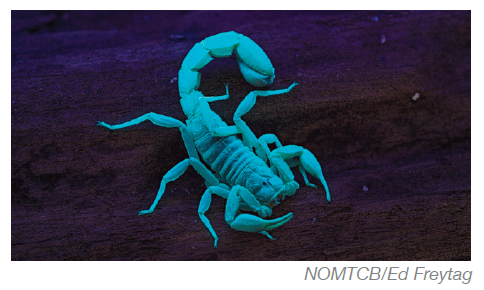 How they operate: Being nocturnal (night active) helps scorpions maintain proper body temperatures and water balance. A waxy layer on the outer cuticle decreases moisture loss and provides protection. The cuticle fluoresces under blacklight, which can be helpful during night inspections. Scorpions are predators and will lay in soil burrows, cracks, crevices, under stones, etc., waiting for unsuspecting prey. They feed on insects, spiders, centipedes, earthworms, and other scorpions

Adult scorpions perform an elaborate courtship, with the male leaving a sperm packet for the female. Adult female scorpions may have several broods. With a gestation that ranges from 5-12 months or more, they give birth to live young. The litter size of the striped bark scorpion ranges from 13-47 (31 average). After hatching, the first instars (period between a molt) climb on the mother’s back and are carried around for 1-2 weeks. After the next molt, the second instars leave the mother and fend for themselves. The striped bark scorpion will undergo 5-6 molts before adulthood. Most scorpions live from 3-8 years with some species living 20+ years.

The “ouch” factor: Scorpion stings can range from irritating to severe, depending on the species and the possible allergenic response of the individual receiving the sting. The good news is that very few species found in the U.S. are considered deadly and they do not transmit disease. The scorpion sting is comparable to that of a bee or wasp. Ice packs applied to the affected area will alleviate pain. However, as with any sting, allergic reactions in the victim may develop. Mild-to-severe reactions may lead to edema, discoloration, numbness and pain, which may last minutes to days. If these conditions persist, seek medical attention.

How to control them: Like many other pests, the most effective way to control scorpions is by using Integrated Pest Management IPM). For scorpions, habitat modification is critical. Suggestions include: 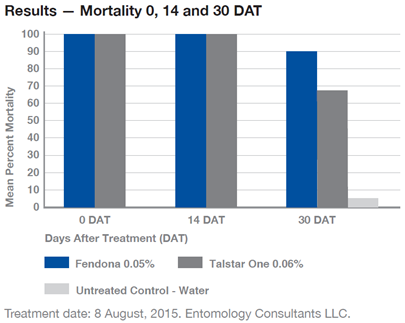 On Structure: Use as a residual treatment on outdoor surfaces of buildings, porches, window frames, eaves, patios, garages, garbage sheds, and other areas where pests congregate or enter premises. Treat entry points such as doors and windows, and under siding and eaves of a structure, including gaps beneath siding, overhanging ledges, undersides of decks, weep holes and other protected areas. Voids created by brick and stone veneers can be attractive to scorpions and should be treated.

Off Structure: Treat stone/rubble walls and piles, wood piles, bases and trunks of shrubbery, trees, mulch, vegetation, and other areas where scorpions may harbor. Treatments should be made to and under landscaping stones, landscaping ties, mulch, gravel, grassed areas, garden beds, under splash guards, and other possible harborage areas. When treating mulch, landscaping rocks, foundation walls and adjacent soil, etc., consider using more water to carry the Fendona CS finished dilution into the protected areas where scorpions are commonly found.

Interior: Treat potential points of entry, corners, cracks and crevices where scorpions hide. Voids can be harborages and good areas for treatment. Garages are common points of entry where treatments and sticky traps can help.

Products for scorpion control are available in different formulations, including liquids, dusts, and granular products. As a liquid, Fendona CS Controlled Release Insecticide contains a microencapsulated active ingredient which provides faster control and longer residuals as the capsules sit up on surfaces for better interaction with the scorpion. Dusts can be used in voids, including crawl spaces and attics. Granular materials can help around the perimeter and rocky and brushy areas. For best results, use the highest rates listed on the product labels. In addition to the application of Fendona CS, remember that proper Integrated Pest Management and the removal of food sources will guard your customers’ families, pets and property against scorpions. Good luck and good hunting!

Dr. Bob Davis BCE is a Technical Services Representative, BASF Professional & Specialty Solutions. Dr. Davis is based out of central, TX. He can be reached at 512-657-5913 or robert.davis@basf.com